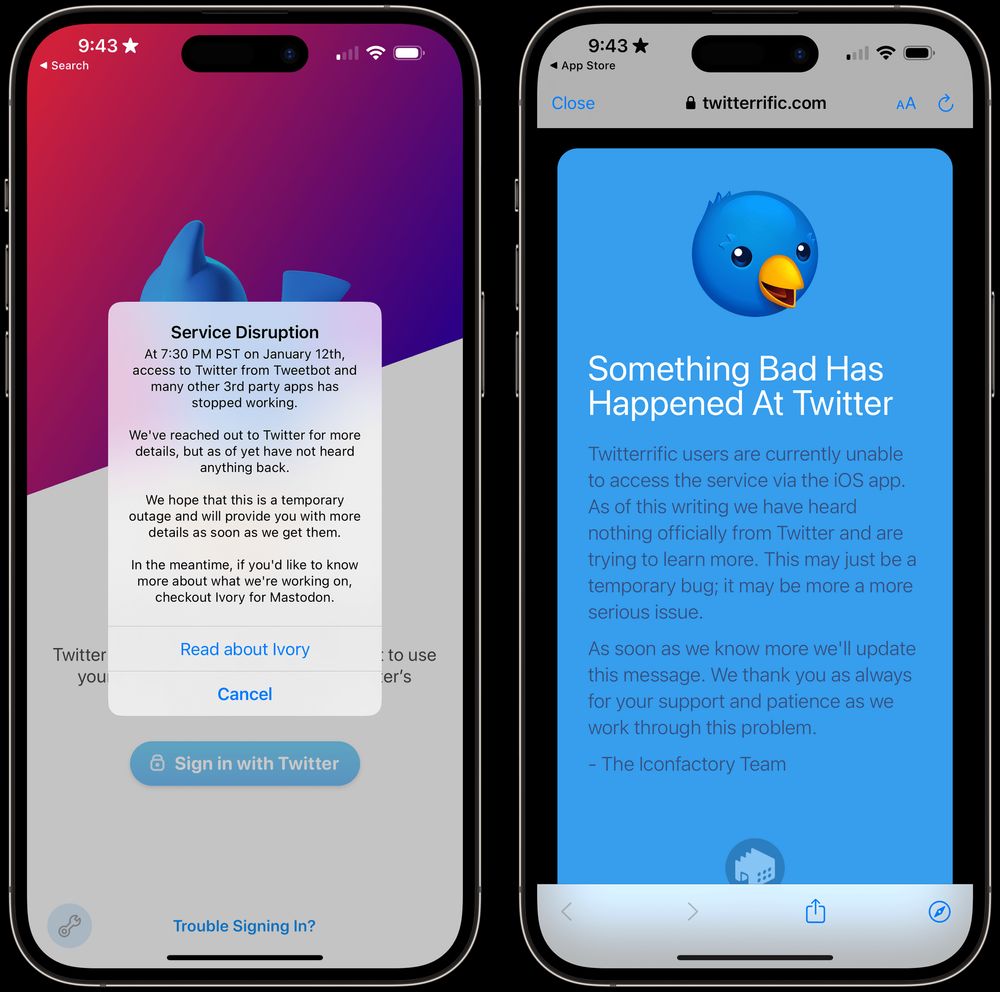 Late yesterday, The Information reported that it had seen internal Twitter Slack communications confirming that the company had intentionally cut off third-party Twitter app access to its APIs. The shut-down, which happened Thursday night US time, hasn’t affected all apps and services that use the API but instead appears targeted at the most popular third-party Twitter clients, including Tweetbot by Tapbots and Twitterrific by The Iconfactory. More than two days later, there’s still no official explanation from Twitter about why it chose to cut off access to its APIs with no warning whatsoever.

To say that Twitter’s actions are disgraceful is an understatement. Whether or not they comply with Twitter’s API terms of service, the lack of any advanced notice or explanation to developers is unprofessional and an unrecoverable breach of trust between it and its developers and users.

Twitter’s actions also show a total lack of respect for the role that third-party apps have played in the development and success of the service from its earliest days. Twitter was founded in 2006, but it wasn’t until the iPhone launched about a year later that it really took off, thanks to the developers who built the first mobile apps for the service.

As it turns out, Twitter’s developer detente was short-lived. The fact that Elon Musk’s Twitter has cut off third-party developers isn’t surprising. Franky, I expected it sooner, but I didn’t expect it to be done with an utter lack of respect for the developers who played such a critical role in the service’s success for more than a decade. The number of people who use third-party Twitter apps may be small in comparison to the service’s overall user base, but the role of the developers of those apps and the value of those power-users to Twitter’s success is outsized by comparison. The developers of Twitterrific, Tweetbot, and every other app that has lost access to Twitter’s APIs deserved better than a silent flip of the switch late one Thursday night.

There have been many moments over the past decade when we worried that third-party Twitter apps might have met their end and didn’t. Unfortunately, I think this time, those past fears have been realized.

The fact that Twitter just shut down the access without any notice is the main bug here.