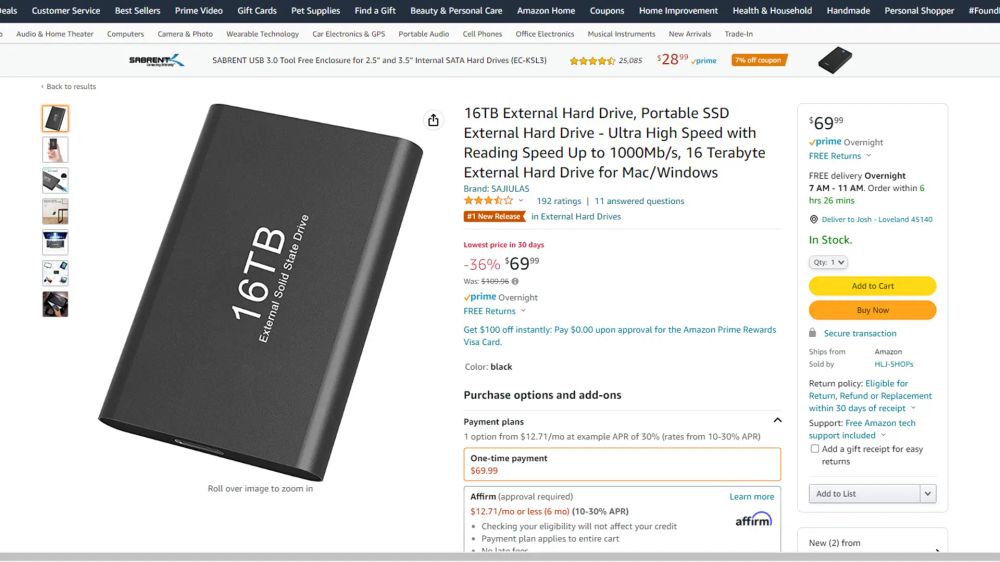 You don’t have to go far to find these fake hard drives. Start a search for a 16 terabyte (TB) external hard drive, and you’ll get dozens and dozen of entries. Most are from completely unheard-of brands like “WIOTA” or “SAJIULAS.” But while these strange brands offer hard drives under $100, options from well-known brands like Western Digital are in the multi-hundred dollar range.

It gets more suspicious. Compare the sub-$100 offering to the others, and you’ll notice the case appears to be much smaller. The well-known brands don’t offer 16TB SSD portable drives; they’re merely enclosures for traditional spinning drives. But the sub $100 brands claim to be M.2 SSD, one of the most expensive and fastest formats out of there. For reference, the largest portable SSD Samsung offers is 2 TBs, and it goes for $180.

I did have some difficulty procuring the 16TB portable SSD. The listing claimed it would come directly from Amazon, but instead of fast two-day shipping, my package went to the wrong state entirely and got lost for a moment. I’m not sure how the courier confused Wisconsin and Ohio. But that may have been an Amazon mistake, as the company let me know about the delay and that it turned over the package to UPS to fix the problem.

Once it arrived, I found an unassuming box with an equally unassuming hard-drive and USB-C cord inside. The box makes some grandiose claims:

That last one isn’t a typo; I’m really not sure what “| OS” is. The USB 3.0 Micro B has to be a mistake too; the cord inclosed is USB-A to USB-C. But regardless, with a USB C 3.1 connection to an M.2 SSD, this thing should scream.

“What would I find inside?” I wondered as I carefully shoved one end inside the case. Hopefully, I didn’t break whatever was inside. Maybe it really would be a magical 16TB M.2 SSD drive. Perhaps they just installed it incorrectly, and thus it wasn’t performing correctly. Or maybe, if I were to suggest more likely outcomes, I would open the casing and find world peace. Or the solution to unlimited energy. Or at least the answer to why hot dogs come in ten packs while hot dog buns come in 8 packs.

Alas, once I managed to take the drive apart, I found exactly what I suspected from my tests: a micro SD card slotted into a circuit board acting as a USB-C adapter. The micro SD card doesn’t have any markings on the front side, and some serial numbers on the back that seem to confirm the 64 GB size my testing revealed.

Why does Windows show a 16TB drive, then? That’s likely a part of the board’s firmware, falsely reporting a size that doesn’t exist. This thing is a total lie, from top to bottom.