In a blog post last night, AltspaceVR announced they would be shutting down on August 3rd (next week).

It is with a tremendously heavy heart that we let you all know that we are closing down AltspaceVR on August 3rd, 7PM PDT. The company has run into unforeseen financial difficulty and we can’t afford to keep the virtual lights on anymore. This is surprising, disappointing, and frustrating for every one of us who have put our passion and our hopes into AltspaceVR. We know it will probably feel similarly for you.

You’ve made AltspaceVR one of the best places to be in VR (or on the internet). We won’t try to write down all of the memories that are flooding our hearts right now of all of the laughter, puns, fun and friendliness that existed in this community. There have been spontaneous concerts, new friendships, marriages, surprise serenades (looking at you Shoo Shoo!) and too many warm hugs from Claire to count. We hosted so many firsts! And we still have the record for most people in VR at one time (were any of you there at Reggie’s first performance?). We’ve also seen so many community members come into their own and host karaoke nights, improv, movie nights and meetups for people all across the globe.

We are all humbled by what you made of this virtual oasis. Thank you for spending your time building, hosting, and making the best community we could have wished for. Please take the next week to make sure those connections live on past AltspaceVR. Because if you do, then what we built will really live on.

There have been many tears and there will probably be a few more to come. We’ve given up wiping off the mist that clouds our headsets. Please join us for a final farewell party on 8/3. At the end of the party, we will be shutting down AltspaceVR.

AltspaceVR was a gathering place in VR, it didn’t matter what platform you used, there was a client for it, and you could create rooms to chat with friends, host gaming tournaments (virtual disc golf was one personal favorite).

They streamed everything from concerts to stand-up comedy tours to presidential debate viewing parties, so that you could be right there and watch it live with others, or just sit around a virtual campfire.

It’s sad to see them shut the doors.

END_OF_DOCUMENT_TOKEN_TO_BE_REPLACED

There’s a long piece by Christina Passariello about Jonathan Ive and the new Apple Park Campus over at The Wall Street Journal. It’s not quite an Ive profile and not quite an Apple Park piece, but something in between.

This bit leaped out at me:

The thousands of employees at Apple Park will need to bend slightly to Ive’s vision of the workplace. Many will be seated in open space, not the small offices they’re used to. Coders and programmers are concerned that their work surroundings will be too noisy and distracting. Whiteboards—synonymous with Silicon Valley brainstorming—are built into floor-to-ceiling sliding doors in the central area of each pod, but “some of the engineers are freaking out” that it isn’t enough, says Whisenhunt.

No battle plan survives contact with the enemy. Some of the initial resistance will be the natural human response to any change, of course. But beyond that, there will almost certainly be real issues with moving productive Apple employees out of their offices and into big white open-plan workspaces. It’s going to be a period of adaptation for everyone who works at Apple.

We moved to an aggressively open plan, with almost no offices, when I was at IDG. I think it worked for some people, but it definitely didn’t work for others. Sometimes I think people who work in fields where an open collaborative environment don’t understand that people in other fields (writers, editors, programmers) might not share the same priorities when it comes to workspaces.

END_OF_DOCUMENT_TOKEN_TO_BE_REPLACED

I love my pressure cooker, and this is a dish that’s one of my favorites.

How to Make it

END_OF_DOCUMENT_TOKEN_TO_BE_REPLACED

The Nintendo Switch is the new-and-improved game system for gamers like me. When I’ve gone over to my friends’ houses, I explored the Xbox, and PlayStation 3 and 4. But these game systems are nothing compared to the Nintendo Switch. My grandmother just bought me the game system this summer, because I got a good report card.

If you have an Xbox or a PlayStation, you can’t bring it on a trip with you. You have to leave it at home. But if you have a Switch, you can take it on the airplane. If you really want to finish something in your game, you can bring the Switch instead of leaving it at your house. The Nintendo Switch makes me happy, because I don’t have to wait to go home to play.

You can use multiple controllers to play with your friends. I mostly play by myself, and sometimes I play with my friends or my parents. When I was on vacation, I played with my friend Evan and it was really cool to have competition. It was the first time I got to play with another kid. I can’t wait to play with my best friends Liam, Shrey, and Jackson when we all get back from summer vacation and have a sleepover.

My favorite part of the Nintendo Switch is the graphics. These graphics are the best graphics I’ve seen Nintendo make. They have really good-looking colors, and the ideas are presented in a clever way.

I almost got my 9 year old to do this when I wrote my original switch review, seeing these game systems from their point of view is always refreshing.

END_OF_DOCUMENT_TOKEN_TO_BE_REPLACED

Rogers has just released their Smart Drive unit for tracking your driving and car status.

In a press release, Leroy Williams, Vice-President of Rogers Communications had this to say:

Consumers are looking for more ways to stay connected wherever they are. Of the 24 million cars on Canada’s roads today, over three-quarters don’t have Wi-Fi or any connectivity features.

We’re excited to be the first carrier to introduce this kind of device to Canadians. Now, families can have peace of mind about their car maintenance and safety and can connect to the things and people they love worry-free.

I’ve spent the past week testing it out and other than one or two small annoyances, it’s worked pretty well.

Setting it up is easy, you simply plug it into your car’s ODB II (on-board diagnostics) port and let it connect to your cell provider via its onboard SIM card, then it starts tracking driving habits and how your car is doing.

With the Smart Drive installed, you can: 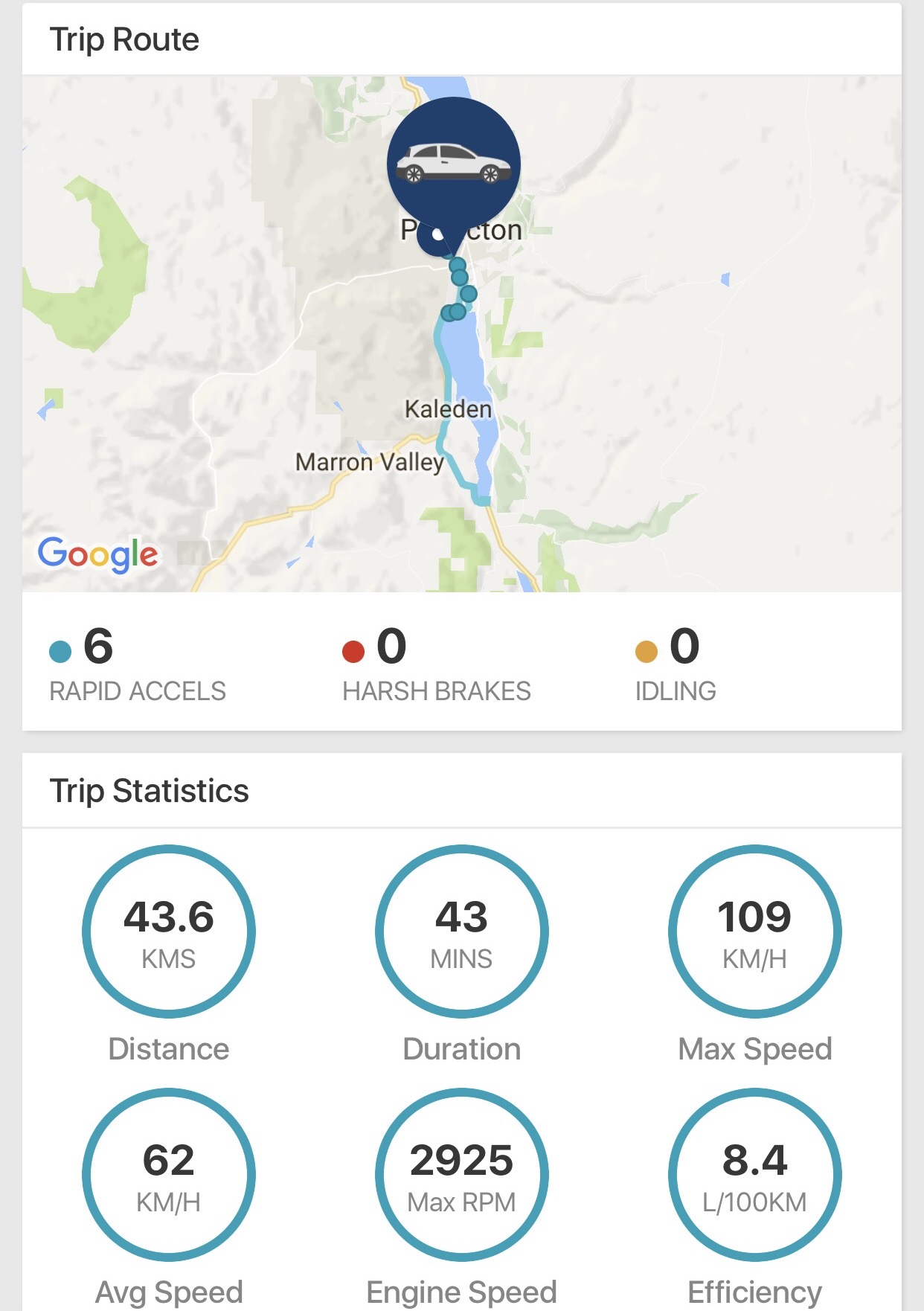 The mobile app contains quite of bit of info from each trip you do, making it handy.

The biggest annoyance is if you accidentally knock the unit lose when you get in or out of the car. This happened three times, once I was able to merge the new car into my existing car, but the other two times I had to completely start over with a new car and lose all previous history.

I can get past this though as it was my fault, I was the one who knocked the unit lose because I wasn’t entirely paying attention as I got in or out of the car.

Actually, that’s really the only annoyance so far. It’s worked well for tracking my driving, or telling me how my car is doing.

END_OF_DOCUMENT_TOKEN_TO_BE_REPLACED

Adobe has long played a leadership role in advancing interactivity and creative content – from video, to games and more – on the web. Where we’ve seen a need to push content and interactivity forward, we’ve innovated to meet those needs. Where a format didn’t exist, we invented one – such as with Flash and Shockwave. And over time, as the web evolved, these new formats were adopted by the community, in some cases formed the basis for open standards, and became an essential part of the web.

But as open standards like HTML5, WebGL and WebAssembly have matured over the past several years, most now provide many of the capabilities and functionalities that plugins pioneered and have become a viable alternative for content on the web. Over time, we’ve seen helper apps evolve to become plugins, and more recently, have seen many of these plugin capabilities get incorporated into open web standards. Today, most browser vendors are integrating capabilities once provided by plugins directly into browsers and deprecating plugins.

Given this progress, and in collaboration with several of our technology partners – including Apple, Facebook, Google, Microsoft and Mozilla – Adobe is planning to end-of-life Flash. Specifically, we will stop updating and distributing the Flash Player at the end of 2020 and encourage content creators to migrate any existing Flash content to these new open formats.

Several industries and businesses have been built around Flash technology – including gaming, education and video – and we remain committed to supporting Flash through 2020, as customers and partners put their migration plans into place. Adobe will continue to support Flash on a number of major OSs and browsers that currently support Flash content through the planned EOL. This will include issuing regular security patches, maintaining OS and browser compatibility and adding features and capabilities as needed. We remain fully committed to working with partners, including Apple, Facebook, Google, Microsoft and Mozilla to maintain the security and compatibility of Flash content. [To see each partner’s announcement on this news, click on the links inside each partner name.] In addition, we plan to move more aggressively to EOL Flash in certain geographies where unlicensed and outdated versions of Flash Player are being distributed.

Adobe will also remain at the forefront of leading the development of new web standards and actively participate in their advancement. This includes continuing to contribute to the HTML5 standard and participating in the WebAssembly Community Group. And we’ll continue to provide best in class animation and video tools such as Animate CC, the premier web animation tool for developing HTML5 content, and Premiere Pro CC.

Looking ahead, Adobe will continue to provide the best tools and services for designers and developers to create amazing content for the web.

Let’s keep in mind the now infamous Thoughts on Flash that Steve Jobs wrote back in 2010.

END_OF_DOCUMENT_TOKEN_TO_BE_REPLACED

Files replaces the iCloud Drive app in iOS 11 and brings a number of enhancements to working with your files on your iPhone and iPad.

There is a Browse and Recents tab at the bottom of the Files app. In the Browse tab you can easily navigate between files stored on iCloud or on your device, a Recently Deleted location along with Favorites, and Tags. Let’s dive into some of the details.

END_OF_DOCUMENT_TOKEN_TO_BE_REPLACED

Brian Elias, the chief of operations for the Los Angeles County coroner’s office, confirmed the death and said it was being investigated as a possible suicide. Mr. Elias said that law enforcement authorities responded to a call shortly after 9 a.m. Pacific Time and were investigating a death in Palos Verdes Estates in Los Angeles County.

END_OF_DOCUMENT_TOKEN_TO_BE_REPLACED

After months of delays, Samsung’s much ballyhooed voice assistant Bixby is here — and users on social media are already noticing the company’s loaded, sexist characterizations of its female and male voices.

Inside Bixby’s “language and speaking style” menu, Samsung describes its female voice as “chipper” and “cheerful,” while the male voice is described as “confident” and “assertive.”

END_OF_DOCUMENT_TOKEN_TO_BE_REPLACED

John Gruber writing about force quitting apps to save battery: