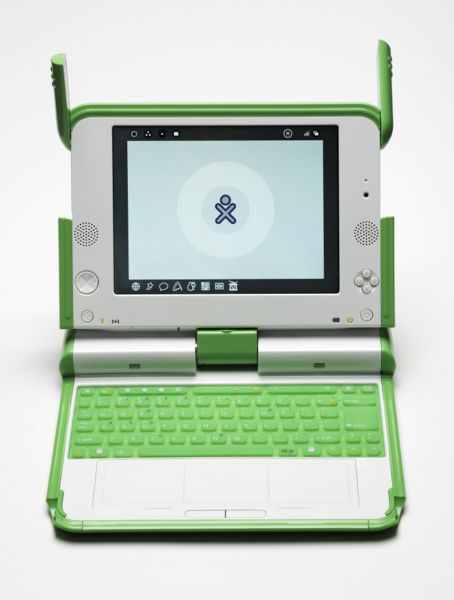 Adi Robertson, writing for The Verge:

It was supposed to be the laptop that saved the world.

In late 2005, tech visionary and MIT Media Lab founder Nicholas Negroponte pulled the cloth cover off a small green computer with a bright yellow crank. The device was the first working prototype for Negroponte’s new nonprofit One Laptop Per Child, dubbed “the green machine” or simply “the $100 laptop.” And it was like nothing that Negroponte’s audience — at either his panel at a UN-sponsored tech summit in Tunis, or around the globe — had ever seen.

After UN Secretary-General Kofi Annan offered a glowing introduction, Negroponte explained exactly why. The $100 laptop would have all the features of an ordinary computer but require so little electricity that a child could power it with a hand crank. It would be rugged enough for children to use anywhere, instead of being limited to schools. Mesh networking would let one laptop extend a single internet connection to many others. A Linux-based operating system would give kids total access to the computer — OLPC had reportedly turned down an offer of free Mac OS X licenses from Steve Jobs. And as its name suggested, the laptop would cost only $100, at a time when its competitors cost $1,000 or more.

“We really believe we can make literally hundreds of millions of these machines available to children around the world,” Negroponte promised. “And it’s not just $100. It’s going to go lower.” He hinted that big manufacturing and purchasing partners were on the horizon, and demonstrated the laptop’s versatile hardware, which could be folded into a chunky e-reader, a simple gaming console, or a tiny television.

Then, Negroponte and Annan rose for a photo-op with two OLPC laptops, and reporters urged them to demonstrate the machines’ distinctive cranks. Annan’s crank handle fell off almost immediately. As he quietly reattached it, Negroponte managed half a turn before hitting the flat surface of the table. He awkwardly raised the laptop a few inches, trying to make space for a full rotation. “Maybe afterwards…” he trailed off, before sitting back down to field questions from the crowd.

The moment was brief, but it perfectly foreshadowed how critics would see One Laptop Per Child a few years later: as a flashy, clever, and idealistic project that shattered at its first brush with reality.

If you remember the OLPC at all, you probably remember the hand crank. It was OLPC’s most striking technological innovation — and it was pure vaporware. Designers dropped the feature almost immediately after Negroponte’s announcement, because the winding process put stress on the laptop’s body and demanded energy that kids in very poor areas couldn’t spare. Every OLPC computer shipped with a standard power adapter.

By the time OLPC officially launched in 2007, the “green machine” — once a breakout star of the 21st-century educational technology scene — was a symbol of tech industry hubris, a one-size-fits-all American solution to complex global problems. But more than a decade later, the project’s legacy is more complicated than a simple cautionary tale. Its laptops are still rolling off production lines, and a new model is expected later this year.

And people are still talking about the crank

OLPC wasn’t just a laptop, it was a philosophy. Negroponte insisted that kids needed to personally own the computers, so they’d be invested in maintaining them. And they should be able to use them anywhere, not just under teachers’ supervision. For inspiration, he pointed to educational researcher Sugata Mitra’s famous Hole-In-The-Wall experiment, where children taught themselves to use a computer in a Delhi slum. Mitra’s vision was more minimalist than OLPC’s, but both projects were almost totally focused on distributing computers. Kids’ natural curiosity was supposed to do the rest.

This was a provocative idea, and Negroponte’s OLPC pitch toed the line between ambition and hubris. The organization wouldn’t just sell hundreds of millions of units, he declared; it wouldn’t even take orders of less than a million. The laptop wasn’t just tough, it was so tough you could throw it across a room — a feature he’d happily demonstrate in interviews.

These pronouncements made headlines. “We wouldn’t be having this conversation — and OLPC wouldn’t be recognized still, ten years later, by many people — if they hadn’t gone in big from the start,” says Christoph Derndorfer, former editor of entrepreneur Wayan Vota’s now-defunct blog OLPC News.

But OLPC’s overwhelming focus on high-tech hardware worried some skeptics, including participants in the Tunis summit. One attendee said she’d rather have “clean water and real schools” than laptops, and another saw OLPC as an American marketing ploy. “Under the guise of non-profitability, hundreds of millions of these laptops will be flogged off to our governments,” he complained. In the tech world, people were skeptical of the laptop’s design, too. Intel chairman Craig Barrett scathingly dubbed OLPC’s toy-like prototype “the $100 gadget,” and Bill Gates hated the screen in particular. “Geez, get a decent computer where you can actually read the text,” he told reporters.

Even fans of OLPC were somewhat dubious. “We were excited about the prospects, but kind of scared by the over-simplistic plan, or lack of plan,” recalls Derndorfer. OLPC Newscould have been an enthusiastic booster of OLPC, but it was also a relentless gadfly — its first archived post, quoting a ZDNet report, is titled “OLPC not a good beginning.”

And the laptop Negroponte was pitching in 2005 simply didn’t exist. OLPC’s prototype was little more than a mockup. It hadn’t signed a manufacturer, let alone priced out a sub-$100 product. Groundbreaking technologies like the crank and mesh networking system were still mostly theoretical.

I remember the hype around the OLPC when it first was announced, in many ways it helped trigger the netbook craze that followed it with low cost, under powered computers that eventually got replaced by tablets.